In the early part of 2009, four guys came together with the intentions of creating music. These four being Todd Teal, guitar, Tim Greear, bass, Bennie Donald, drums, and finally Bo Dinkins, vocals. After a few short months, they had enough music in order to play out in front of a live crowds. With some well-recieved home town gigs under their belt, Murderfly began to branch out and play shows in Orlando, Florida. Every show seemed to propel the Murderfly train forward more and more with increasing speed. However, in September of the same year, Murderfly would be forced to be put on hold with the sudden departure of their drummer Bennie Donald. Three short months passed when bassist Tim Greear would find the answer to the problem. That answer would be in the name of Ben Bassett and this name was discovered in the Musicians Search of the Space Coast’s area Craigslist ad. Only needing two weeks before his official audition, Ben came into the Murderfly warehouse ready to throwdown, and throwdown he did! After a quick run through of a song musically, all three members looked at each other and knew that they had found the missing puzzle piece!

Taking the end of 2009 to rebuild, Murderfly would emerge with a whole new energy and a purpose in 2010. The month of March would find the return of Bennie Donald to the Murderfly fold but this time he would be weilding his guitar skills. Recording a short 4 song demo in April of 2010, Murderfly would roll on through the year finding open slots infront of national bands like Drowning Pool and Nonpoint while also headling local clubs on their own.

The start of 2011 would bring way to the departure of guirtarist Todd Teal from the group forcing them to move on as a four-piece. Never one to slow down, Murderfly would continue to gain more of a fan base and recognition from the local metal community. After the summer time, Murderfly would see the unfortunate departure of its second drummer, Ben, and the arrival of their third drummer Justin Nichols. In November of that same year, the newest and current guitarist, John Stafford, joined the group completeing the lineup and forming the “fist of doom”. As a band, Murderfly looks forward to things to come in the future. When asked, “What do you sound like?” Each band member, having a WIDE variety of influences, coming together as a MASTERPIECE can only call it “MURDERFLY”! (Music for BAD MUTHA FU*KERS!) 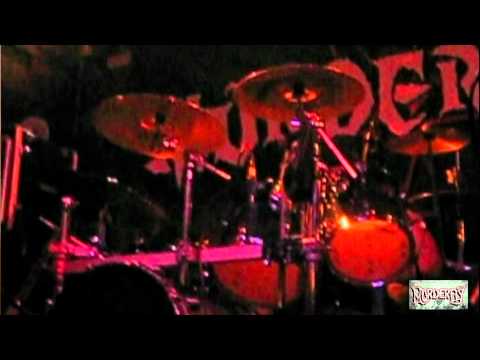